EACH BIRYANI ORDER IS INDIVIDUALLY COOKED IN HANDMADE NATURAL CLAY POTS & SERVED TO YOU IN THE SAME EARTHENWARE.

COOKED THE REAL WAY IT SHOULD BE!
VEG HYDERABADI BIRYANI

Biryani requires special treatment to keep its aromas and flavours intact and for that reason we prepare our biryani in specially handcrafted pots to give you the authentic flavours.

Delivered at your doorsteps

We deliver our Biryani at your door steps in the same natural clay pot in which it is cooked, so that flavours don’t get tempered.

Perfect to make your occasions royal

Whether it’s a normal office day, casual dinner or weekend parties, our Biryani will make your every occasion a royal feast with its enchanting aromas and irreplaceable taste. 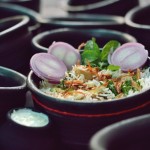 Legacy behind “Biryani” and Handi “Pot”

India has had a rich Mughal history. Apart from their monuments, the thing that excites one the most is their eating habits and their staple diets. The most popular among them is BIRYANI. Mughal Emperor Shah Jahan’s Queen, Mumtaz Mahal is supposedly thought to have inspired the dish in the 1600’s. On a visit to the Indian army barracks, she found the soldiers heavily undernourished. She requested the chef to prepare something that combined both meat and rice and provided a balance of rich nutrition and protein. What the chef created was biryani.

During the Moghul days, clay pots (Handi) were considered to be the best way to cook biryani as it was easily available to common man unlike those costlier vessels used just for Maharajas and Moghuls. It had also been found out that Biryani when cooked in clay pot or handi used to be flavoursome due to its earthen qualities. Thus the legacy of Handi Biryani or Pot Biryani is still continued in modern days but with their own twists.